The Musée Collection des Arts is one of the largest private collections in Europe with over 25,000 unique art works. It belongs to the patron of arts and philanthropist David Iakobachvili and his son Mikhail.

This unique collection brings together the best samples of decorative and applied art, jewellery and fine art. Over two decades of collecting, the Museum founders have managed to collect remarkable works by internationally renowned and top-ranked artisans and artists, which are significant artefacts of the past. The time span of the collection extends from the second half of the 16th century to the present day.

The collection is divided according to the following sections: art jewellery that features rare antique snuffboxes, clocks and various accessories; large-scale collections of Art Nouveau glass and Art Deco sculpture, collections of art silver and lapidary works of art.

Furthermore, the entire spectrum of the collectors' interest comprises the history of musical mechanics and sound recording. These sections of the collection feature multifarious self-playing mechanical items such as organs, orchestrions, music boxes and automata. The gem of the collection is the huge Sound Library that enlaces more than 20,000 different musical records of the past, giving a complete picture of sound recording evolution.

The diversity, status and quantity of the assembled by the collectors exhibits definitely places this collection among the world's leading art institutions. 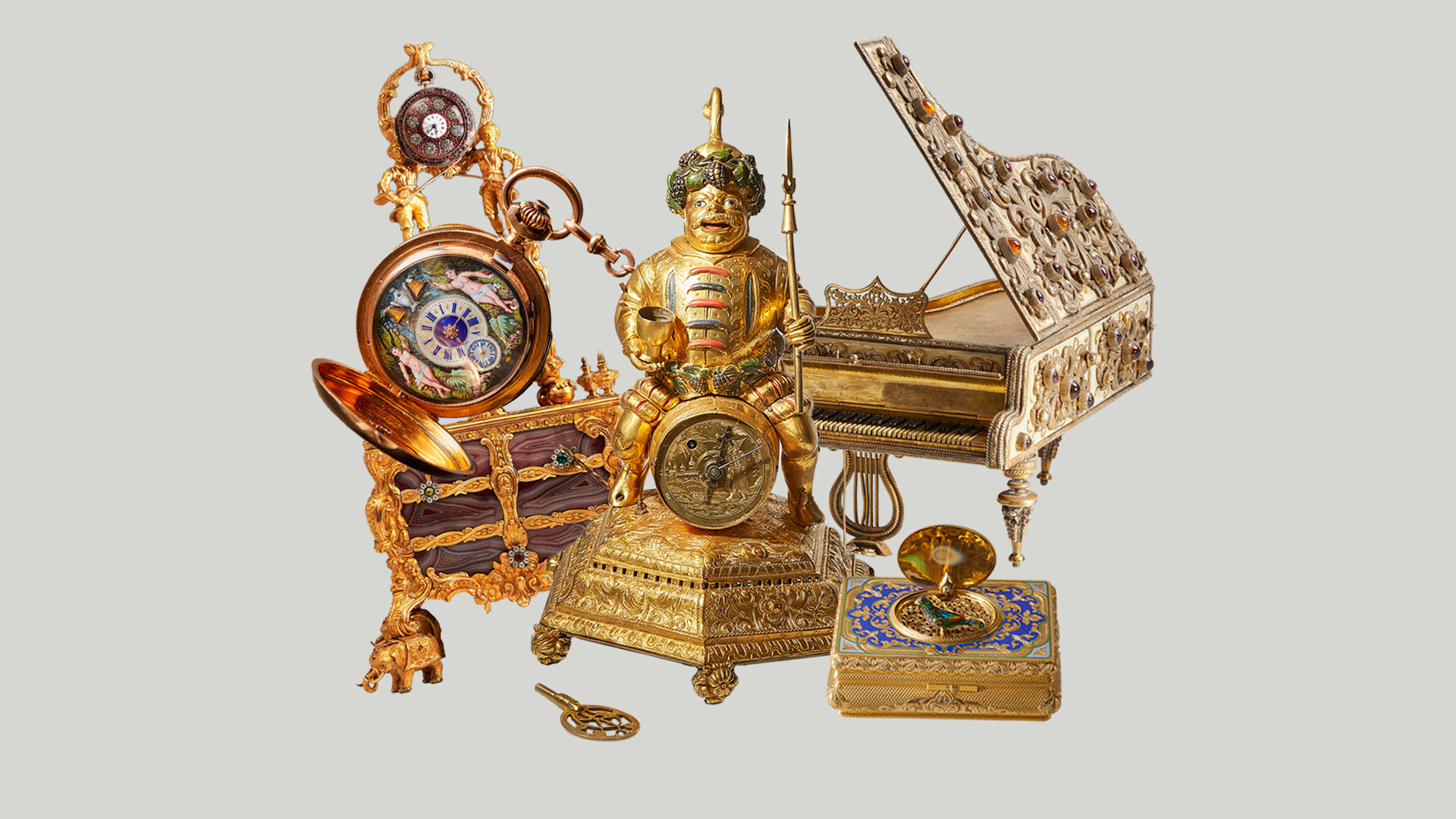 The collection of fascinating jewellery exhibited in the Museum is one of a kind; it has been recognized by experts as unique. It features exquisite jewellery, rare snuffboxes and caskets, jewellery accessories, toiletry cases, writing sets and clocks with built-in automata.

The demand for such items was enormous at all times. They were commissioned from the best artisans and there was no limit to the jewelers’ imagination. Traditional materials for fine crafts such as gold, silver, ivory, precious stones, porcelain, tortoiseshell and wood were used.

These items were created by the renowned jewellery masters, founders of the world-acknowledged fine jewellery companies in the fascinating field of arts and crafts that combines jewellery making and fine mechanics mastery. Furthermore, the entire spectrum of the collectors' interest comprises the history of musical mechanics and sound recording. These sections of the collection feature multifarious self-playing mechanical items such as organs, orchestrions, music boxes and automata. The gem of the collection is the huge Sound Library that enlaces more than 20,000 different musical records of the past, giving a complete picture of sound recording evolution. The diversity, status and quantity of the assembled by the collectors exhibits definitely places this collection among the world's leading art institutions. 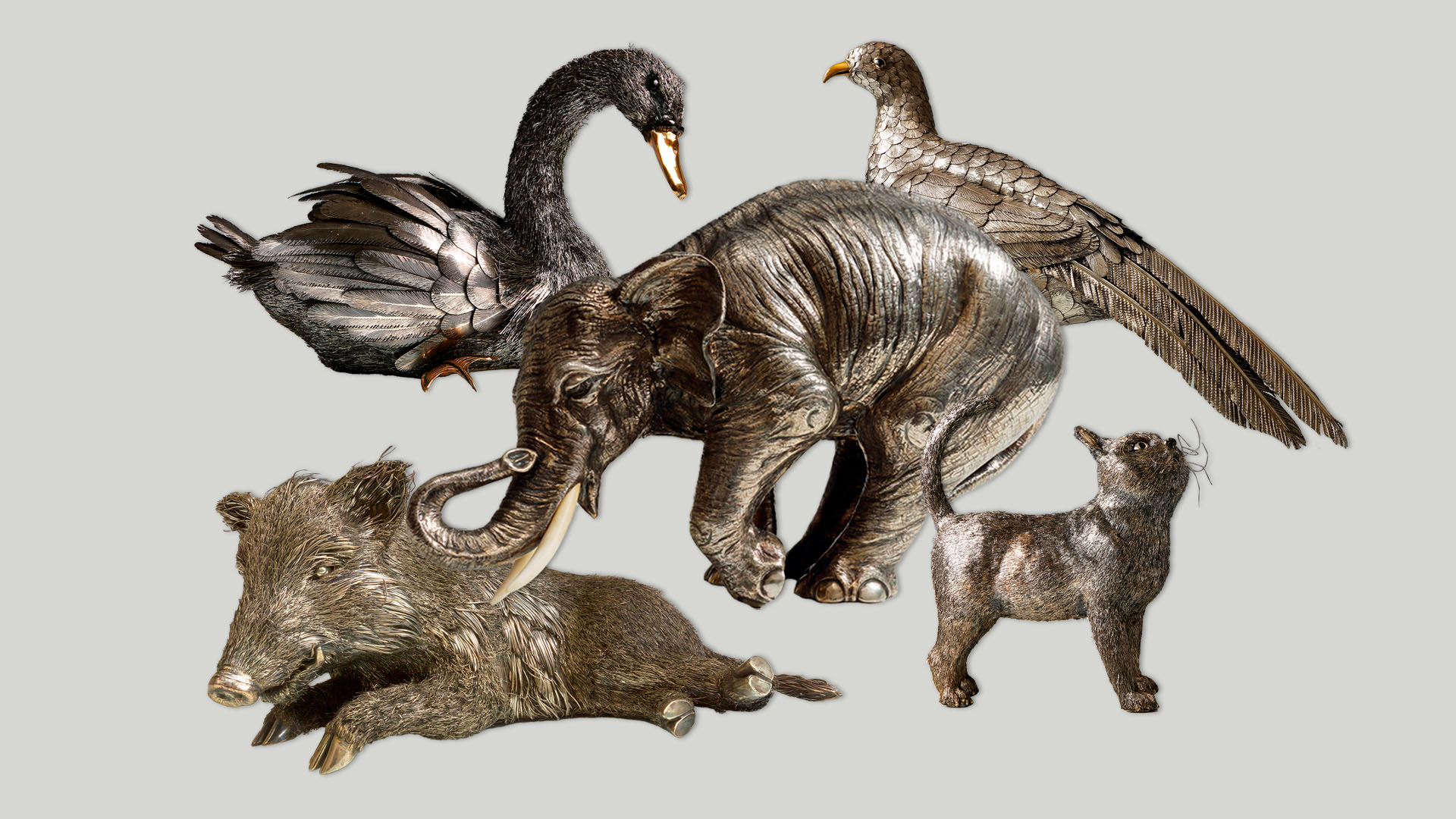 Timeless design aesthetics and exquisite artisanship have always been the core of Buccellati universe. Tireless commitment of the Buccellati House to creating objects of exquisite beauty facilitated creation of distinctive, unique style and set those artisans apart from their competitors.

The Buccellati family firm carries on tradition of the five centuries history of Italian jewellery making.

Silver figurines of animals and birds hold a special place in the production range of the firm. The Buccellati House jewellers implement their author-developed “fur and feathers” technique to create these realistic interior masterpieces.

Buccellati personify Italian jewellery art based on Renaissance traditions, perpetuated to the 21st century by the efforts primarily of Mario, then Gianmaria and nowadays his son Andrea and daughter Lucrezia. Traditions and culture, handed down from generation to generation, help to create perfect products that are admired all over the world. 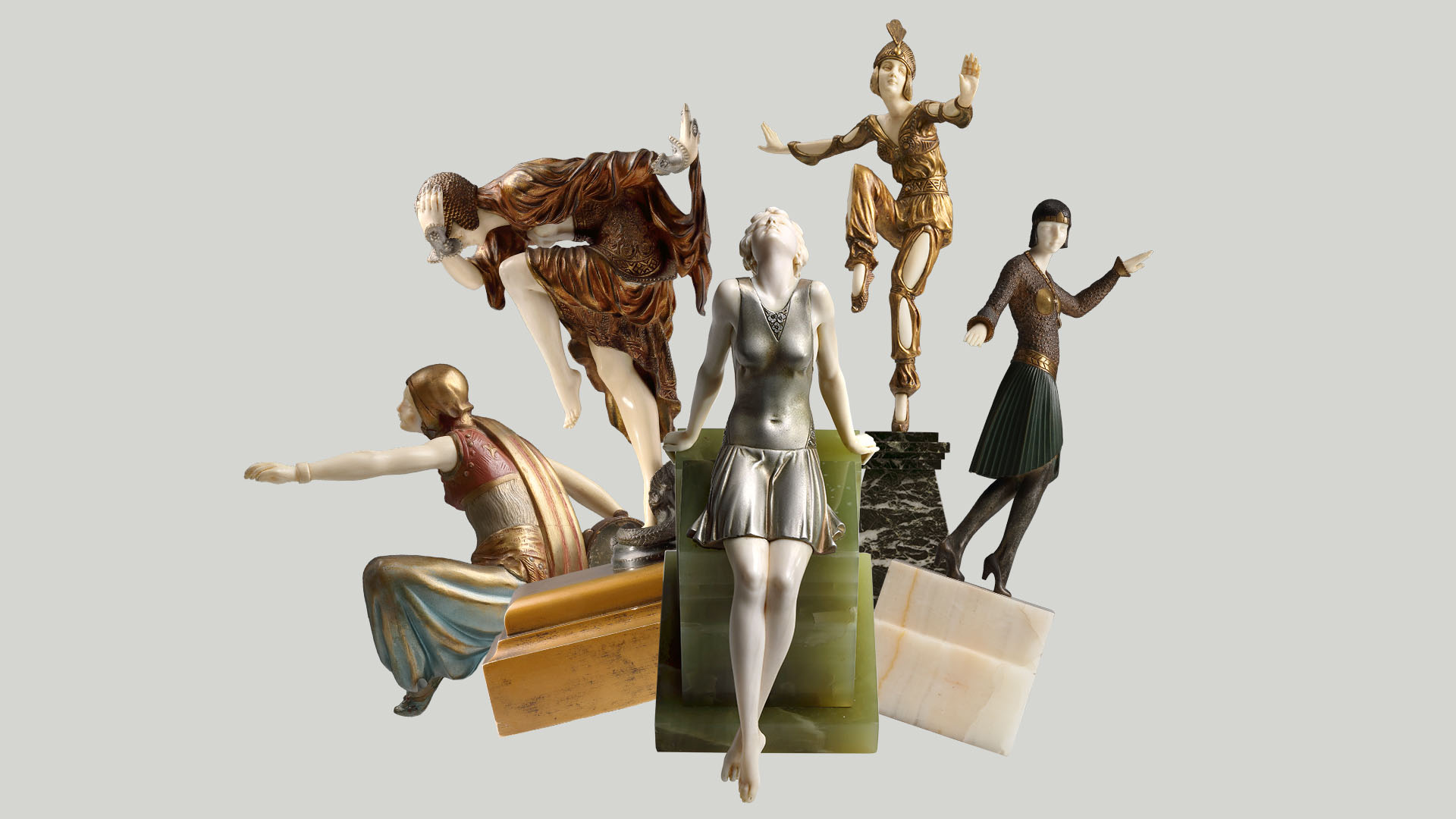 The Art Deco style, which emerged in the mid-1920s, can rightly be considered the most refined and elegant of all the styles of the 20th century. Its origin is connected with the typical French concept of luxury and sophistication, which in the 1920s was often expressed through the use of unusual, exotic materials.

This is how this style emerged, characterized by its use of geometry, stylized motifs and the austere aesthetic of new materials, replacing the intricate natural forms and materials of Art Nouveau.

Paris is considered to be the Art Deco motherland, although the style has become truly international. Designers from all over Europe and America have found inspiration in the traditions of past cultures, admiring the images of the Ancient East. Following the archaeological discoveries of the day, this style also incorporated elements of the fine arts of classical Antiquity, Egypt and the Aztec culture. In the 1920s and 1930s, sculptors turned to chryselephantine techniques, using two basic materials that they combined masterfully - ivory and bronze. Natural stones, tortoiseshell, lacquer and silver were also used in manufacturing. The colour scheme was dominated by contrasting principles, enhanced by luxurious fabrics, shiny metal surfaces and expensive natural materials. All this reflected the spirit of the Art Deco as well as possible.

Art Deco sculpture can be categorised as small or cabinet statuary. Thanks to its small size and functionality, this sort of sculpture has come to play an important role in interior design. Art Deco sculpture is a unique phenomenon in European art. Graceful and fragile, it gradually died out in the late 1930s and early 1940s as the development of the style was interrupted by the Second World War. The second wave of interest in the Art Deco style arose in the 1960s. In 1966, a newly revived exhibition at the Musée des Arts Décoratifs in Paris officially adopted the term Art Deco, and interest in the style of luxury and elegance sustains today!

Traditions and culture, handed down from generation to generation, help to create perfect products that are admired all over the world. 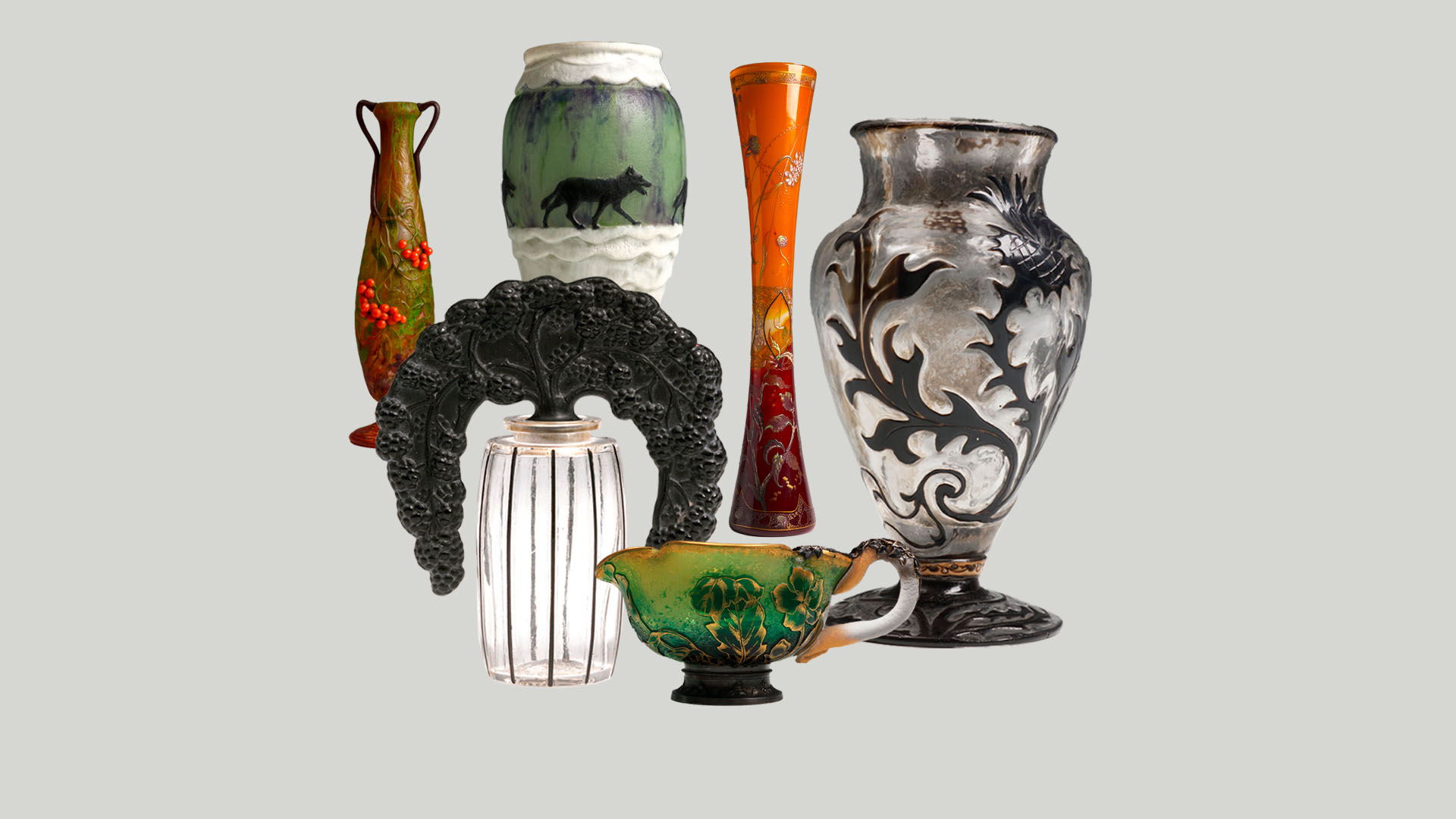 The works of Émile Gallé (1846-1904), the illustrious eminent master of art glassmaking, whose name impersonates the Art Nouveau period in the sphere of decorative and applied art. The term “the Halle technique” (or “the Halle style”) was popularly accepted and defined the items made from colored multilayer laminated glass.

Apart from the serial and mass-circulation works of Emil Halle manufactory produced in the 1900-1930’s, the collection also highlights the items made from colorless transparent glass and painted in the Historicism style of the 1880-1890’s. They were created during the period of the artist’s collaboration with the Meisenthal Glass factory. The French manufacture Daum Frères in the 1900’s, the Russian Imperial Glass and Porcelain plants (IG&PP) and Gusevsky crystal factory in the 1910’s followed the “Halle style”. Their products are presented at the collection as well.